Are you ready for drone-as-a-service (DaaS)?

July 13, 2017
Drone-as-a-service (DaaS) is just one of the new business models likely to emerge from the surging popularity of the small, unmanned flying machines.

Over the past two years, drones have come seemingly from out of nowhere to become a major new tool for organizations that need to manage far-flung assets. The global revenue market for drones is expected to hit $6 billion in 2017—up 34% from last year—and reach $11.2 billion by 2020, according to Gartner. 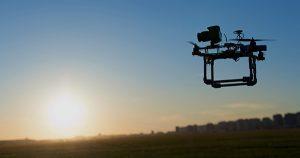 Far from being the domain of hobbyists and voyeurs, drones are now finding practical applications in many business and government applications. State governments use them to inspect hard-to-reach infrastructure like bridges, dams, and highway overpasses. Drones can fly over treacherous terrain to check on machinery in remote locations. They also can be used for aerial security reconnaissance of events where crowds gather, making them an important tool in the battle against terrorism.

“Any time the safety of a person comes into play, there’s a place for drones,” said Mike Stone, product manager for Infor EAM, in a presentation at Inforum 2017.

Drones can do their work with less disruption to day-to-day operations. Take an inspection of girders on a bridge, for example. Ordinarily, “You’d have to shut down lanes, put up scaffolding and bring in safety equipment, because you’re putting people in harm’s way,” said Joe Arthur, chief innovation officer for Infor Federal. “When you put a drone in place, you don’t have to shut down the bridge. There are no permits, fewer people, and significant time savings.”

All of which means that drones are poised to take on increasing importance in helping enterprises manage their assets. Not surprisingly, Infor is there with Drone Enterprise Asset Management Solution (DEAMS), a service born of a partnership with Drone Aviation Corp. that incorporates data from flying objects into the records companies maintain on their valuable but often difficult-to-access equipment and infrastructure. DEAMS is so innovative, it’s been selected as a finalist in the Software & Information Industry Association’s prestigious CODiE awards (winners will be announced July 25).

“With the advent of drones and the Internet of things, strategies for traditional asset management are being radically changed,” said Javier Buzzalino, Infor senior vice president of development.

Plus, drones are way cool. Commercial units cost up to $40,000, but prices are expected to come down rapidly with volume, Arthur said. There are three types of drones: helicopter, multi-rotor, and fixed-wing, of which the first two are the most popular in commercial environments because of their ability to hover.

While drones are often depicted as being free-floating devices, the reality is that battery-powered drones have limited commercial value because they can only stay aloft for about 20 minutes without a recharge. More practical are tethered drones, which get power from the ground via a cable. Because they don’t need a battery, these units can fly higher, faster, and longer. In fact, they can technically fly forever. They’re also less likely to get lost. “Tethered drones are like an elevator: You go up and you go down,” Stone said. “Untethered drones can get away from you.”

The U.S. Federal Aviation Administration helped nudge drone adoption along last summer when it relaxed rules to encourage business adoption. Prospective pilots now need only complete only a classroom test to earn a license. That’s good, because there will be a need for 420,000 new drone pilots by 2021, Arthur said. Restrictions have also been eased on where and how the mini-copters can be used, and rules that inhibit technology innovation have also been relaxed.

One reason the FAA is backing down on its initially cautious stance about drones is because the benefits are so compelling. Cash-strapped government agencies that may be tempted to skip road and bridge inspections because of cost can now fit those important public safety measures into their budgets. The same goes for commercial entities such as energy companies, which can dispatch drones to remote locations like floating oil rigs for a tiny fraction of the cost of sending human inspectors.

Which doesn’t mean drones are perfect. Because they’re limited to video inspection, they can never duplicate the thoroughness of a human expert. Drones also create questions about how to store and manage the massive amounts of data they generate, including altitude, speed, weather conditions, and location. “If your sensor is taking a reading every second, that’s 86,000 readings a day,” Stone said.

Video files are large, difficult to classify and expensive to download in real time. “You’ll have to think about how to incorporate that data into your information management strategies,” Stone said.

Expect Infor to help. Drones are expected to join smart sensors as an essential tool in achieving the goal of identifying and preventing equipment failures before they happen. Buzzalino called predictive maintenance “the Holy Grail of asset management.”

One thing is sure: For organizations that manage assets that are difficult or dangerous to reach, drones are now a practical solution. “A robust commercial drone ecosystem has emerged and will continue to thrive,” Stone said.