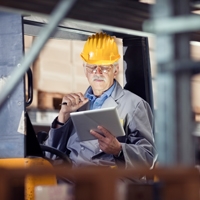 While definitions for Industry 4.0 are numerous, it’s essentially: “The marriage of physical and digital technologies such as analytics, artificial intelligence, cognitive technologies, and the Internet of Things (IoT). This marriage of the physical with the digital allows for the creation of a digital enterprise that is not only interconnected, but also capable of more holistic, informed decision making,” according to Deloitte. Data collected from the physical world (like machinery) is used to generate insights, which are then reapplied to the physical world. Deloitte says, “These feedback loops generate abundant opportunities for new products and services, better ways to serve customers, new types of jobs and wholly new business models.”

The magnitude of change

Is it possible to separate the hype from reality and obtain a true picture of the magnitude of change that has already hit manufacturing and what is yet to come? No. Hype and reality are tightly intertwined. Hyperbole and optimism have combined and evolved into to a new generation of stories that elicit amazement and envy. We’re bombarded with articles describing manufacturing plants performing near-miraculous feats: Robots think, machines communicate, cameras fly, inventory is never out of stock, and orders are always on time; a customer can imagine a product, and in the blink of an eye, the product is produced and delivered.

And yet, this isn’t even smoke-and-mirrors or fanciful dreams. For some, these are already realities. Considering science and technologies that already exist, as well as the results of early adopters, experts who live and breathe innovation are projecting that this level of change will certainly get much bigger.

In fact, the analysts at Capgemini predict that smart factories could add from $500 billion to $1.5 trillion in value to the global economy in the next five years.

Prognosticating beyond that, however, proves challenging. The subject matter is moving at an alarming rate of change, making it difficult to definitively quantify results. Even timely surveys, like the ones referenced in this paper, might already be outdated by the time their statistics are published—as more factories deploy IoT projects and boost profits.

While manufacturers must learn to live with a degree of ambiguity as to what exactly the future has in store, the simple truth is that technology as a driving force in manufacturing is not going away any time soon. We don’t even have consensus as to what we call this “new technology” that’s changing the way we design, make, and deliver products to customers. The German government coined the phrase, “Industry 4.0” as a nod to the “fourth industrial revolution.” Industry 4.0 originally encompassed machine-to-machine (M2M) technology and connected devices. The equipment industry used to call this telematics.

Then the sensor market exploded and the IoT was the next big thing. Soon, the “Industrial Internet of Things” (IIoT) came about as result of the need to distinguish industrial applications from more consumer-oriented applications. The UK prefers the term “4IR,” for fourth industrial revolution. There are also smart factories and smart products, as well as smart Millennials who insist on highly intuitive software that behaves like their smart phones.

No matter what you want to call this wave of disruptive technology, it’s real and about to drastically change your factory—if it hasn’t already. Now is the time to ramp up technology investments in order to keep pace, seize unfolding opportunities, and enjoy the benefits of Industry 4.0.
Region